Thanks for checking out our 1st Alpha Devblog! Some of you might be new here, thanks much for the support! We've been quite busy over the last 6 weeks or so getting out our first alpha builds. We were patching quite frequently and I've not had a chance to share much more than patch notes for some time now. Our longer term supporters will tell you we're rather active when it comes to devblogs and we will do our best to get one out every week.

This devblog will focus on what we've been working since our 2nd alpha patch, 1.0.2. There has been a tremendous amount of bug reporting done and suggestions suggested by all of you and we're very grateful. We had a small but dedicated team of 'testers' for the last two years and with the player base expansion, issues are being found quicker. We're able to tell what really needs doing first just by how many duplicate reports and suggestions we get. We'll not delve too far into fixes here although we'll list them at the bottom. The blog today will focus on just some of the suggestions and improvements the community has made that we're now implementing.

Firstly the team would like to thank everyone for their continued support of our project. We've not had the greatest start, largely due to our past lack of knowledge. It has taken some time for Survive the Nights to grow but it's finally doing so. Thank you if you've been here a while. As you know, STN is our first project and we've grown quite a lot over the last few years. Our development pace reflects that growth. The learn as you go method while tried and true, isn't the fastest and we wouldn't be here without our original backers helping to push fixes and features.

A major thank you to all the new supporters in alpha. The community and player base has grown quite a bit over the last 3 weeks and our bug reporter/suggestion tracker reflects that. We're here and paying attention to your issues and ideas, so please continue to share them they truly will help to shape the project and the game you want and are now playing.

One of our biggest requests in regards to the crafting system so far has been the ability to create the maximum amount of an items. James has spent some time this week working out [Create Max] mechanics for the crafting systems. You'll see these mechanics introduced in the next patch. Crafting will continue to be improved. If you have additional suggestions please use that in game tab.

Create maximum at once
​
Weapon Unloading

One of the biggest weapon requests outside of additional weapons has been the ability to unload weapons. This week James has spent a bit of time working on weapon unload. You'll now be able to remove ammo and it should restack to an ammo box in your inventory. You'll see this live in the next patch

Something we've noticed watching you all play and have wanted to sort for some time is window damage. Andre has spent a bit of time this week sorting random window damage. You'll now notice zombies and players do random damage to window fortifications. If you've not put it together, this means zombies will get out and into houses quicker now so keep that in mind

Something requested often has been a FOV slider. Andre spent time this week getting that back into the project and you'll see it available to you in the coming patch.

In the coming updates you'll see all of our garage doors functioning. Watching videos, watching players live on servers it's clear to us now that you need and enjoy vehicle storage. John spent some of his time this week working on animating all the in game garage doors. The smaller warehouses with 'coming soon' doors will function in the next patch. We'll also be adding more garages to structures that don't have them, small residential garages, along with adding and animating garage doors on houses with attached garages.

Towns are missing a decent hunting source, while most do have chickens you need to venture to the wilderness for a bit more meat in most cases. In the next patch we'll be introducing foxes, they'll be mostly based in towns. This should breath a bit more life into towns along with providing the player with a chance at an additional food source. Jos has spent a good deal of time beginning implantation and you should se fox in our next patch

Fox, hope you have a hunting permit!
​
Additional Changes and Fixes

Please check our changelog out for a full breakdown of what we're doing and what's up. Above is only a small section of suggestions and fixes we're working on. The changelog for the most part updates with pull request approvals and merges. What you see there should be in our next build. Below is the changelog as of writing this devblog.

Just a couple of quick things we're working on for future updates. We'll have a proper roadmap up shortly. Clinton is working on design when he has the time. We've been working on quite a few new fortification mats and traps. Below are a couple examples of both. 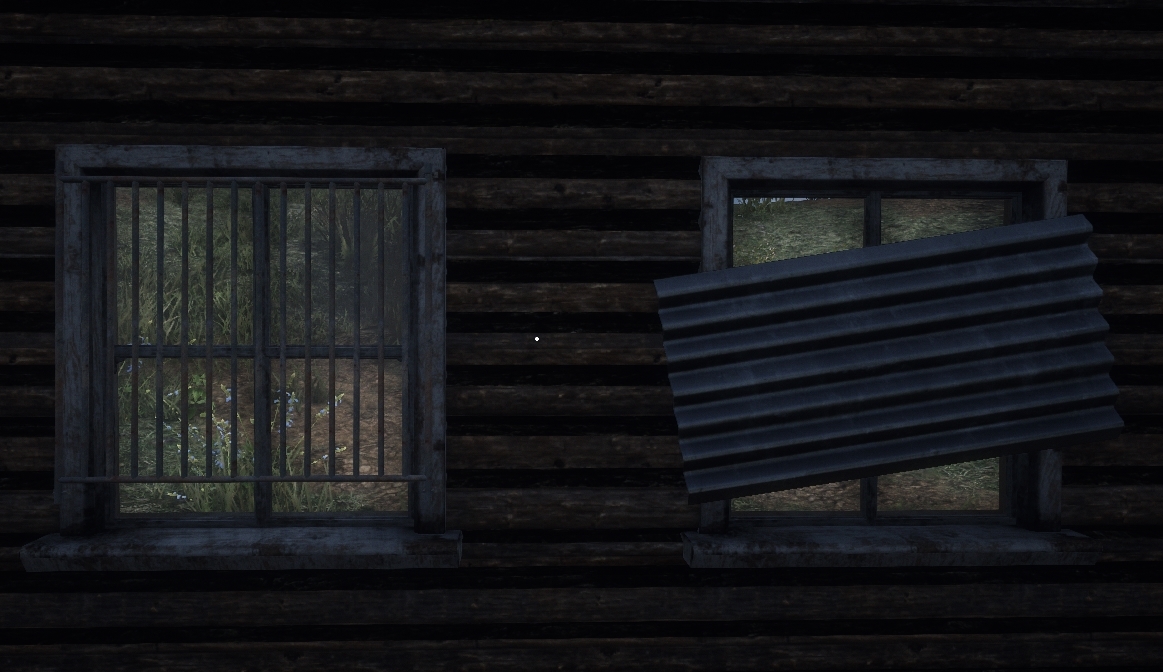 Metal bars and metal sheeting
​
Thanks for checking out our first alpha devblog. We'll do our best to get a devblog out weekly aside from patch weeks. Please consider switching over to our experimental branch if you're interested in upcoming feature as they will be first released there. We're hoping to have the next patch out on experimental branch next week. Thanks for the continued support and continued issue and suggestion reporting . Below are some helpful links to anyone new and interested in the game. If you'd like to follow a bit closer, please consider joining our Discord we're here, we're listening!