I believe it was a one off custom built chopper but it used the 1970's Triumph T120 Bonneville engine. May not be the quietest thing, but you would sure have a lot of fun with one!

I think it would be cool to see choppers in the game. Not necessarily this one, though.

Completely understand, and yes it doesn't necessarily haft to be this one. Thanks for replying.

it would be awesome to have this in the game

"What is better - to be born good, or to overcome your evil nature through great effort?"
―Paarthurnax

Choppers would be f**king sweet as a retarded gimmick, not necessarily ripped from TV shows and s**t though. Think that'd be too immersion breaking.
Last edited by a moderator: Mar 4, 2015

Choppers or Motorcycles in general are a good idea.

Agile, fast, low fuel consumption (unless a chopper with a huge engine). Parts probably easy to come across

Downsides are its probably got very limited space, boot can contain a pistol and some ammo if that.

I survived the apocalypse,
now I reside here.

Here is idea for choppers,

Make them customizable With different parts

I would prefer more compact motorbikes or older cycles, no hunking, attention-whoring metal beasts that are really unrully.

If you really want to show your dominance in ways like what vehicle you ride, then go with a hummer or a semi, which are much more possible additions to the game then hunky metal bladers.

If you really want to show your dominance in ways like what vehicle you ride, then go with a hummer or a semi, which are much more possible additions to the game then hunky metal bladers.

Regards, Blender
Click to expand...
Driving an armoured vehicle like the BTR-80A would make me feel pretty safe, but yes I have to have a tank like the T-90 so I can burn through massive amounts of fuel just to show off to some other players and blast their camps away and then go for a joy ride through zombie hordes.......

Using the search option I didn't see any threads specifically about scooters. So if it's been suggested in another thread as a sub-idea my apologies. Regardless I think scooters would make a fine edition and add variety to the game. Before searching for scooters I first looked about skateboards and saw that someone had already suggested it. Though some people prefer scooters over skateboards and bikes so I thought why not suggest it for varieties sake. It requires less balance than a skateboard and doesn't require a chain like a bicycle. It could also be used as a temporary weapon if need be.

I was really surprised that motorcycle scooters hadn't been suggested, more so than kick scooters. While seemingly not as appealing compared to cars and trucks, for a pair or lone wanderer it's a great machine for covering vast distances. Being small they are usually fuel efficient which is needed in the apocalypse, but they are also considerably fast. Reaching speeds of 50-60mph(80-96kph) at top speeds. One example which is a favorite brand(Italian) of mine is the 1965 Vespa SS(Supersport) 180. 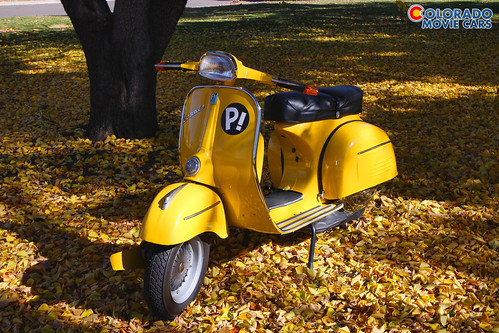 These first two being remodels to resemble a vespa from a TV series, which you may or may not recognize. This beauty of a scooter has a max speed of 105km/h(65mph) and a fuel efficiency of 85mls/U.S gallon(102mls/imp. gallon). Can seat two passengers and 22lbs(11kg) of luggage. Has a fuel capacity of 2.4 U.S gallons(1.89 imp.) and 0.47 U.S gallons(0.39 imp) reserve. If taken care of it could last you through the apocalypse and then some. Of course it comes in a variety of colors not just yellow. I forgot to mention, with the start up key you can lock the handlebars/steering column. Effectively making it difficult for someone to just hot wire and take off with your ride.

Another example which is more modern would be a Stella from Genuine Company.

With similar specs as the Vespa SS 180, I think either would make a good addition to the game. What do you think?

I don't think scooters have been suggested i love this idea and i would love to see this in this game good suggestion man keep the good work up.

Phoniex6512 said:
I don't think scooters have been suggested i love this idea and i would love to see this in this game good suggestion man keep the good work up.
Click to expand...
Thank you, glad I'm not alone in my support for this. Though quite curious how much of a task it'll be to implement them for the devs.

*thinks of all the fun he could have with this idea...*

Scooter + Yellow Raincoat + No Shoes = Coolest kid on the block

Location
In her Nest.

I'm a giant cookie eating Dutch Blackbird.
If you had cookies before you read that sentence, I'm sorry but they're gone now.
F

Hello I haven’t seen many suggestions on this so I thought I would go ahead and suggest this for our fellow
“Survive The Night Fans”, I personally believe that adding motorcycles would be a great addition to this game I see so many survival games with cars and other types of vehicles but none at all with motorbikes I believe that adding this in the game could become quite beneficial to the Survive the Night staff and its members.

My reason for this is because assuming you were to add motorcycles you would also be adding a whole new aspect to the game when it comes to having vehicles due to so many new opportunities e.g. being able to get to places faster than you would in a car or you might have a little wider screen when riding a bike because I feel that in real life you are able to see and experience a lot more of what is going on around you than you would if you were in a car, or maybe you are able to park your car inside your house instead of the garage if you wanted to keep it close at all times, or you could add blades to the handle bars so you could drive past zombies and slice them up and possibly they could create huge biker gangs that can have a big camp to all work together to survive.
Doing so will also give you chance to add new types of clothes to be collected like black shirts with skulls or something for the bikers to represent their team.

I believe that adding motorcycles could attract a lot more attention to Survive The Nights and could help you earn money while the members can enjoy their time riding their bikes doing whatever people wish to do in survive the nights.
Thanks for reading my suggestion.

Davz Not Here said:
WITH SIDE CARS !!!!!
Click to expand...
Haha yea that'd be a great idea XD we could also get the option to De-attach and Re-attach them for more speed!

I think that there should be some old early 90's or late 80's cycles. Would be fantastic with a side car
I have seen some things man... and some stuff...
You must log in or register to reply here.
Top