People can use this for all of its obvious reasons like scoping out bases or city checking where people are and reporting on there situation.
Stay safe my friends.

Exactly it so many purposes.
Stay safe my friends.

Not Your Normal Brit

That is a very good idea.

I'm sure many have assumed one of these would be implemented into the game. Thought I would make a thread discussing them in more detail and get some feedback. First off let me explain how they work to let you get a better feel for the terminology. Simplified a binocular or monocular work like any other refractory telescope. Gathering light through the objective(primary lens), it magnifies it by use of a series of prisms and lenses. When referring to the "strength" of a binocular or monocular, numbers are used such as 8x42. In this example 8 would be the magnification, which would make the object you're viewing 8x closer than it actually is. The 42 refers to the aperture, or diameter of the objective lens. Which with binoculars and monoculars is in millimeters. Now a common misconception is that the large the binocular the farther you can see. Which isn't the case, it merely means you'll get a clearer image.

The magnification of the binocular/monocular determines how far you can see. The aperture or size of the objective lens determines how much light is gathered. This only affects the brightness and sharpness of the image nothing more. As with increased magnification comes reduced image quality. To compensate for that the objective lens has to be larger. Though this makes the binocular/monocular heavier and more responsive to movement and thus motion blur.

One last detail to point out is the difference between binoculars and monoculars. It's fundamental and I didn't know about it till I researched it. While binoculars create a three dimensional image by having the telescopes aligned parallel. Monoculars don't provide this feature and instead produce a two dimensional image. 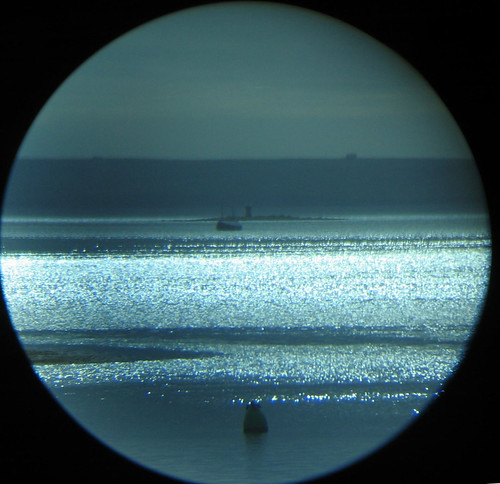 With the science lesson out of the way I'll move on to discussing the applications to STN. Now as mentioned there are different sizes of magnification and diameter of lenses. I think having larger objective lens sizes and magnifications should be a feature. Whether it's by bad luck and you only found a 8x50 or you choose to keep it because of the sharper image. The weight and ability to use said binocular/monocular should vary.

I'd say make monoculars less abundant as most people prefer a three dimensional image. However there may be those who want to pack light and aren't deterred by the monocular's lack of depth. Using an example of what I mean I'll type out a diagram of sorts.

12x36 - 24 ounces
12x50 - 36 ounces
​
Monocular​
10x25 - 5 ounces
10x36 - 9 ounces
​
Given these you could randomize the chances of finding a pair in a house. Either making the larger heavier versions more abundant or the smaller but less detailed ones. While not requesting a different skin, shape, and size for all of them. Variety in their magnification and brightness/sharpness of detail would be interesting and realistic. What are your thoughts on it, have I wasted an hour going into detail for nothing? =P

Really good post man, nice and long lol. I would like to see diffrent types of binoculer's and monoculers, besides the diffrent magnifications and weights they could have really rare hunting binoculers and monoculers. I know some people think they are military items but there are plenty of binoculers and monoculers with either built in rangefinders or Infra Red capabilities. I have a monoculer with IR and it wasn't that expensive. The dev's might be shy about these items but if you are going to have hunting items like stands there will be a possibilty of IR and rangefinders. If your a hunter you can but tons of stuff that seem like they would just be used by the military but are actually fairly availible to civilians, and you don't have to be a fan of military items to own one if you are a hunter. This is the one I have, it's a Bushnel 3x32 monoculer.
http://ecx.images-amazon.com/images/I/81jsA3R3rsL._SX425_.jpg

Something I would also like to see would be the really strong binoculers, the ones that useally come with an attachment to fasten it to a tri or bipod. It would be cool to attach one to the roof of your base or boat for long range spying.
http://ak1.ostkcdn.com/images/produ...Nonslip-Grip-X-trail-Binoculars-P10482593.jpg

I was thinking on IR and rangefinders, but I'm not quite sure how abundant they'd be. Not to mention the opinion of the Devs&Team or about their effect on the game. I would make them more scarce than regular scouting instruments. Also I think having them hand held only could work out in balancing their usefulness. That way if you got a hold of IR binoculars/monocular you could scout for enemies at night but not be a splinter cell.

One thing I forgot to mention and I would like to see is the use of broken binoculars. Say one of the lenses is shattered but the other one works, your character will just use the good one. A player would then have to decide if the one good lens is worth the weight of lugging it around. As for duct taping or tying two binocular pieces together, it isn't practical. Binoculars are aligned a certain way to allow for depth, if they're off by a little it'll produce a double image. Which not only isn't useful but hard on the brain to comprehend.

I could see those large binoculars on top of a building mounted. Possibly over looking the entrance into town and the surrounding woods. However I also think they should give off a glint when at the right viewing angle. Though not sure how complicated that would be to program into the game.
Last edited: Jan 20, 2015

The one I bought was around 200$ nut they have much cheaper versions as well as much more expensive versions. Ways they could limit them would be range, most of them excepct the most expensive don't have a great range for the IR function I don't know much about the rangefinders though. They could also limit them through battery power, they could drain really fast and would need to be recharged unleass you have a extra battery for it which should be really rare as well. Some do just run off of simple batteries but for gameplay they should have rare rechargeable batteries. I also like only having hand held models but I think you should be able to craft them onto a weapon, they wouldn't be good for long range though since most weapons range would far excede the range of the IR function unless you were using a flintlock musket lol.

I like the idea of either side of a binoculer being capable of being broken, it would be pretty intersting like you said if it's all you had you would have to deal with the reduced effectiveness, blur or double vision.

I also agree on the glint for the large binoculers or binoc's, monoculers and scopes, I think it could be done programming wise I have seen it in a lot of games. It would be a nice feature and would give some people a chance of survival.

super simple, can we expect binoculars?
We dont want him, we dont need him, but he's here anyway.

i think they are in already or will be, i think we saw some simple binoculars in the old engine, not used but as an item on ground could be mistaken.

I don't see why this could not be a good idea. Make them really rare though I would suggest.
''when there is no more room in hell the dead will walk the earth.''

we could turn them into makeshift gun scopes like in Unturned

I hope theyre in and not all that rare, lets be honest, walking through a store you will see WAY more binoculars then hunting rifle scopes. I think binos you should be able to get after checking a few garages or sheds.
“You'd be surprised at what you'd do to stay alive.” ~ Durzo Blint

https://community.survivethenights.net/threads/sample-screenie-thread-redux-wip.7899/page-2
Last post of page 2...
Now all we could ask for at some point is, the lens can get damaged making it hard to use/see through and maybe one of two variations... maybe older looking kind have less zoom and visual quality compared to a newer model.
One of God's own prototypes. A high-powered mutant of some kind never even considered for mass production. Too weird to live, and too rare to die.
See i saw this pic, then i looked at Num47 profile... and thought it cant all be about sex is it? -Sneakydude
L

yellowing of the lens and/or condensation could be a good way to demonstrate maintenance. I don't think I've ever seen a spare binocular lens laying around or for sale, but I have had to disassemble my binoculars a few times to clean the inside.
You must log in or register to reply here.
Top