We’re moving our experimental branch to default today. 0.5.16 will become 0.6.16 The update below will go over what we’ve been up to (sorry for the delay!!) Along with what has changed in 0.6 and what to expect in the future.

This update has been a while coming as we've not updated in over two months to our default branch. There have been massive development and backend changes, some of which took a bit longer than expected. Lots of work has gone into network relevance. We’ve added measures to stop player states from syncing when players are far away from each other. This will disable far away players saving on some performance. The same has been done with all drops, all physical loot dropped and spawned will cull via our systems completely clearing them from the client. Quite a bit more has gone into the project network wise and will require a great deal of backer testing. You’ll find our current changelog below, it’s a great way to hunt for bugs. As always please leave any issues on our tracker so we can get them fixed!

Now that physical loot is possible, we’ve expanded on all the in game shops. Creating loot specific shops i.e. convenient stores for drinks/food, pharmacies for meds, hardware stores for fortification loot, etc. Nearly 250 shop specific props were added to help rework and redesign shops with more planned for the future! This all needs a great deal of expansion and tweaking, something we’ll work on over the coming months but it has now been reworked and introduced. Below are a few shots of physical loot systems and specific (backer named) shops in game.

Reworked grocery stores - all 'Popov' variants have been redesigned 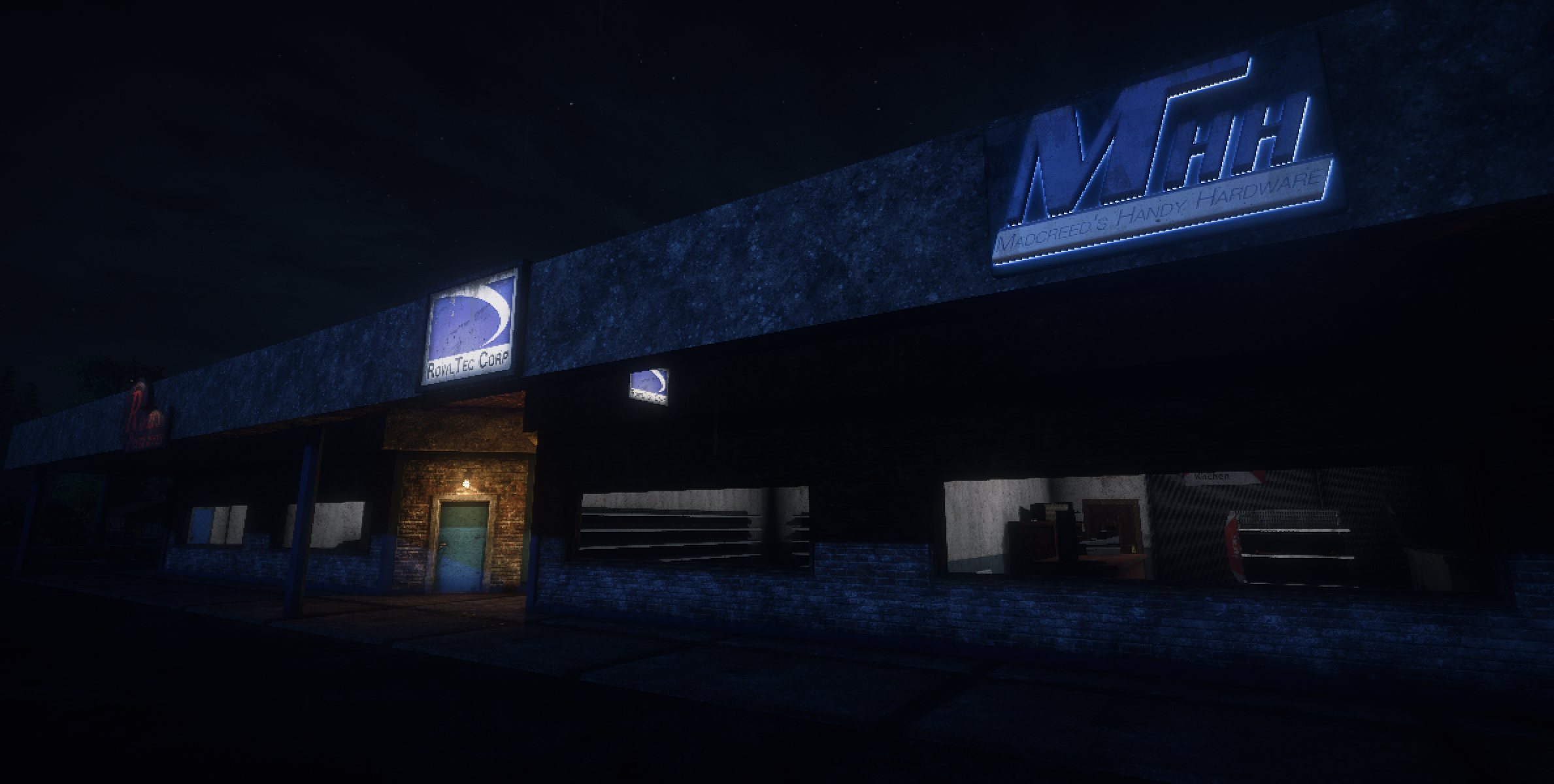 Backer named shops will provide shop specific drops (e.g. hammers in hardware stores)​
With the introduction of this new culling and relevance system, loot that is dropped from the inventory with the [Drop] button will be decay over time. Up until now, there has been zero cleanup on servers. Every item spawned, used and dropped around the world stays on the server. This new system will ease server load. Players that want to keep their goods will need to use placement mode after dropping them. This will shortly be made more user friendly with the introduction of a place mechanic right in the inventory.

There have also been some massive team changes, all for the good! We're moving on up! As many of the close followers may know in the beginning our team was working from home. A handful of us worked what hours we could to put our concepts together. After the amazing success we had with Kickstarter, we were able to move to the project full time. We rented a small corner office in an industrial park just East of the city of Hull in the U.K. The office was 120 square feet and as many of our past interns will confirm, not the most comfortable or creative space. The office was attached to what was essentially a noise manufacturing plant and across the road from a chemical park which wasn't the most inviting work environment. Aside from the aesthetics, the space made expanding the team impossible. 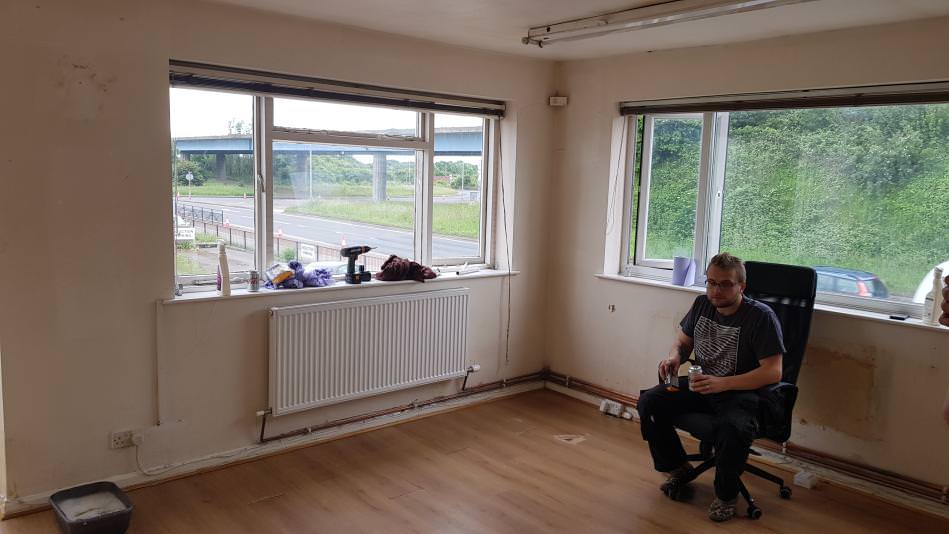 Jay sitting in our old office on moving out day Some good times in this tiny space!​
In the beginning of June, we had the opportunity (also due to leases expiring) to leave our tiny office. The team has moved to the center of Hedon just east of our former location. The space is amazing although it has come with its fair share of work. Vacant for the last 5+ years, it was in rough shape but this would later play to our advantage. Luckily John and James have had their fair share of experience with carpentry and general construction being their now former livelihoods. With the help of Andre, Jos and some friends/family, the office quickly became the team's nightly project! We're happy to say we're done and incredibly pleased with the results. We have only the dedication and continued support of the community to thank for this opportunity. It will not only give us the opportunity to work in a beautiful creative space but allow us the option to expand and bring in additional developers post alpha release! Below you’ll see a time lapse of just a some of the work done over the last month or so.

Everyone helping out to paint the mural

Below is the changelog for 0.6.16 please check against this
Please report any issues found to our issue tracker thanks for the help!
​
Hot fix 0.5.16
Hot fix 0.5.15

• Gravity now instantly activated on items that exit placement mode..
• Easy way to access Inventory crafting and guide tabs. Inputs i o and p now open the inventory to relevant tab.
• Fix for infinite stamina glitch when locking inputs.
• Inputs no longer get stuck when entering/exiting chat.
• Command accepted no longer goes in to the chat multiple times when inputing a command.
• Stopped all player stats being able to go negative or higher than their max amounts.
• Switching weapons has been optimized.
• Reduced radius in which zombies are cleared up when a player spawns nearby.
• Fixed errors when attempting to remove items from the world.
• Fixed scenario where you could enter game, exit and then rejoin but not keep your persistence.
• Fixed issue where starting items weren't persistent through relogs.
• Fixed persistence issue with attached objects in the inventory. Previously if you dropped a gen, added a part, picked it up and then dropped it again the parts would be back to 0/1 (Other than the fuel tank)

• Added player network relevance system which stops state sync when you get far enough away from each other. This limits bandwidth and disables the character model as well.
• Added pickup network relevance that makes network aware pickups on only relevant to the players within the set range. This also turn off the models which saves on rendering and LOD calculations.
• Added pickup placeholder system which turns pickups into none network aware objects when no player is relevant.

• Pressing enter/return now exits placement mode.
• Smoothing added to items that are in placement mode so that they’re not as jittery.
• Fully disabled plastic tote pickup until spawn-able containers are implemented.

The next default build will be 0.7.x. This build will focus on some optimization and feature polish. It will be a quality of life patch that’s a bit over due now. We’ve been grinding away reworking systems. Now that players are giving us feedback, we're trying to find better ways to do things. It’s become time to put that research to work and give the current build a good once over. We’ll focus the month's update basically on getting our mechanics ready for the 0.8.x update. This update will focus on fortifications, a massive part of what Survive the Nights will become.

We’ll be introducing a feedback system in a close future update. The system will allow players to give the team direct feedback as to how features are working or aren’t and how players think they can be improved. This system will allow us to collect data in a more reasonable manner. Right now, the majority of information fed back to the team is issues. We’re working on a better way for you to share your opinions with the team directly and without having to do so on an open forum.

As always, thanks so much for the continued support. The team is excited about the upcoming months, the build and the opportunity our new space will give us to expand. As many of you already know, we’re always available for a chat on our Discord so come on through and say hello, share your ideas or get answers to any questions you might have!

JB_ said:
Hello all,
The office was 120 square feet and as many of our past interns will confirm, not the most comfortable or creative space.
Click to expand...
Can and will confirm, the physical shape of my body has been permanently altered after spending time in said office. (Also mastered the art of squeezing past people)

Congrats on the move guys, new office is looking awesome, especially with that mural!
Feel free to hit me up on Discord, Origin, uPlay, Steam or Skype! Details shared on request.

congrats on the move, looks nice.
“I think nighttime is dark so you can imagine your fears with less distraction.”

Marcel said:
Can and will confirm, the physical shape of my body has been permanently altered after spending time in said office. (Also mastered the art of squeezing past people)

Congrats on the move guys, new office is looking awesome, especially with that mural!
Click to expand...
relatable :')

Seeing the old office definitely brings back some memories!
Are you gonna put all the portraits around the logo with the retired interns upside down?
-Kris
Ex-Intern at a2z(interactive);

That 'photo of Jay in the old office is ripe for some photoshopping! Great to see this game continues to move forward, both in the physical world as well as the online one.

Keep up the good work team
I use an image of Bagpuss as my avatar in the forums. Created by the late Oliver Postgate when working for SmallFilms. The licence is currently held by Coolabi and I have permission to use it for non-commercial instances.

Dr. J said:
That 'photo of Jay in the old office is ripe for some photoshopping!
Click to expand...
It's definitely not photoshop but here you go


I just lost 6 hours of my life
Feel free to hit me up on Discord, Origin, uPlay, Steam or Skype! Details shared on request.

Jos Heuvelink said:
@Marcel Nice one!
Click to expand...
Imagine what beauty could've been created if I'd worked on the trailer! Hehehe
Feel free to hit me up on Discord, Origin, uPlay, Steam or Skype! Details shared on request.

Marcel said:
It's definitely not photoshop but here you go


I just lost 6 hours of my life
Click to expand...
Too funny man, too funny... had me in tears.
One of God's own prototypes. A high-powered mutant of some kind never even considered for mass production. Too weird to live, and too rare to die.
See i saw this pic, then i looked at Num47 profile... and thought it cant all be about sex is it? -Sneakydude

•Adaptively changing music based on time and situation.

looking good guys keep it up.